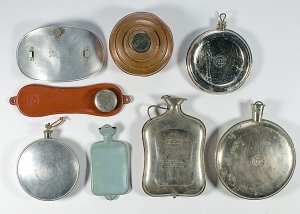 Recently I was under the weather for a couple of days with chills and achiness. It was nothing serious, but it sent me to bed at times to try to warm up. I climbed into bed, fully dressed in my jeans and sweatshirt, and piled on the blankets. My mother’s gone from this earth but I felt her presence as I lay in bed shivering. She passed on the wisdom of the electric mattress pad – a bed warmer, if you will, which I cranked up to high and waited to be warmed up like a piece of bread in a toaster.

I don’t remember it from my childhood so I think she discovered this modern adaptation of metal bed warmers filled with hot coals and the hot water bottle when I was an adult. She talked often about how much she loved it. Like many children, I nodded my head, smiled, and said “uh-huh,” as if I was listening or was interested in a discussion about mattress pads. I had no interest, or the need, for such a thing.

I was too busy doing other life-stuff for such trivial matters. I got married, which theoretically produces a warmer with whom to share your bed. Then the kids came along so my bed was heated by the combustible energy of children coming and going. As everyone started sleeping through the night and I was getting older, I became colder. “Old and cold,” I joked. I started to seriously contemplate my mother’s idea. My husband scoffed at it. “I like getting into a cold bed,” he proclaimed. I don’t. Those first few moments of sheer icy-coldness when you turn in after a long day? Not so much.

So what did I give my husband for our anniversary a couple of years ago? Wait for it…but of course, a Sunbeam electric mattress pad. Okay, I knew he didn’t want one but I was hoping he would change his mind when he actually had one in his hands. As you might guess, he was underwhelmed with the gift. I think he was offended that I would call into question his ability to warm up the bed. Plus, it was so obviously a gift for me, not “us,” he said.  He had clearly expressed no interest in this foreign bed invasion and I deliberately chose not to hear him.  It was admittedly not one of my finer gift-giving moments.

“But there are dual controls, so we can each control the temperature on our own side of the bed,” I enthusiastically explained to no avail. That first winter, he resisted it. I don’t think he used it once. By the next winter he was curious, and cold, and finally began using it. He won’t say it, but I dare say he has come to love it almost as much as me. It has become part of our winter, nighttime ritual, in that whoever goes up to bed first turns on the bed-warmers. Getting into bed in the winter has become a delight – a warm, toasty bed greets me.

The added benefit? It’s part of my mother’s legacy. She’s still tucking me in.

6 thoughts on “A Warm Legacy”