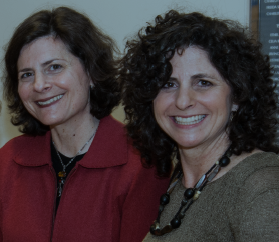 My sister recently came to visit with her kids. She usually stays at my parents’ house, but since my dad has put it on the market, we decided it was best that they stayed with me. My relationship with my sister is something I treasure. She is my friend, my therapist, my superego. We realize how fortunate we are. Not everyone has a sister, or one they like so much. While we have different personalities, we look and sound very much alike. I’m an extrovert, she’s an introvert. I drink Diet Pepsi, she drinks Diet Coke. My hair is curlier. She’s taller. I’m a party girl, she’s a jock.

It’s an odd phenomenon for people to think we’re twins when we are not. I once asked a stranger outside a movie theater if he could recommend a restaurant in the area. He said, “Is your name Judith?” He had gone to high school with my sister, who is four years younger than me and has lived out of state for many years. It’s a little unsettling to freak someone out by your mere appearance. But it’s also kind of cool – it’s our little party trick.

We have a running dialogue, a stream of consciousness free-association, daily conversations with the threads picked up seamlessly, sometimes in mid-sentence. On the rare occasions when our husbands choose to answer the phone, we are called to the phone merely by the word “Sister.”

Having a sister as your bestie has many benefits. We have the same frame of reference from being raised in the same house by the same people. We know all of each other’s friends, who become our friends too. We are the head of each other’s advisory boards. No subject is too big or too small to be discussed – we cover the gamut – marital squabbles, parenting concerns, the merits of the HPV vaccine, SAT versus ACT and how to make chicken schnitzel.

As the older sister I often tackle issues first. By the time my sister was planning her first bar mitzvah celebration. I had already planned two. Here is a typical exchange:

HER: “Assigned seating or open?”

ME:  “Assigned – people need a home base. Wandering around looking for a seat causes even the coolest people to feel like losers. Do your guests a favor and help them avoid social anxiety.”

ME: “Not necessary – just slap up a list with table numbers and names.”

HER:  “Hospitality Bags – what goes in them?”

HER:  “Didn’t Mom say that a certain percentage of the people who rsvp’d won’t actually show up?”

Fortunately, we have similar parenting styles in that we are basically just winging it day by day. Our approach is that we have no official parenting approach. We learned early on that we resort to using the same expletive when pushed to the limit by our children. We figure we must have gotten it from our mother, although she had no recollection of using un-ladylike language.We try to keep in mind one of our father’s go-to parenting slogans, “Don’t get too high with the highs or too low with the lows.”

Neither of us is much into fashion but we are our mother’s daughters so we try to put ourselves together. After our mother died three weeks before my nephew’s bar mitzvah last year I had to return a beautiful suit she had bought for the occasion. Our mother was petite and we are not, so neither of us could wear it. We joked that our mother would have looked better than both of us, which she usually did. We didn’t mind. We felt proud to have such a beautiful, stylish mother even if we sometimes felt like her frumpy daughters.

I often went with my mother to her medical appointments. Once, as we waited to be seen by the doctor, we sat across from each other in the exam room.

“Really? I got it at Target. What don’t you like about it?” I asked, somewhat amused.

“I don’t like the color or the fabric,” she casually explained.

I went home and promptly called my sister with this breaking news.

She said, “You’re getting rid of that jacket, right?”

“Absolutely,” I told her.

Mother was generally right about these things.

Like our mother, we are both practical and like our father, we are direct. We’re comfortable with who we are and generally say what’s on our mind. We enjoy being with other people but equally enjoy being by ourselves. We each lived alone when we were single. We loved the solitude, quiet, and autonomy. When I showed my kids where I used to live before I met their dad one of them asked me who I lived with. I told him I lived alone. He thought that was sad. I relayed this story to my sister.

She, as usual, hit the nail on the head when she deadpanned, “If you call the happiest time of my life sad.”

Life has occasionally tossed me lemons, but not in the sister department.